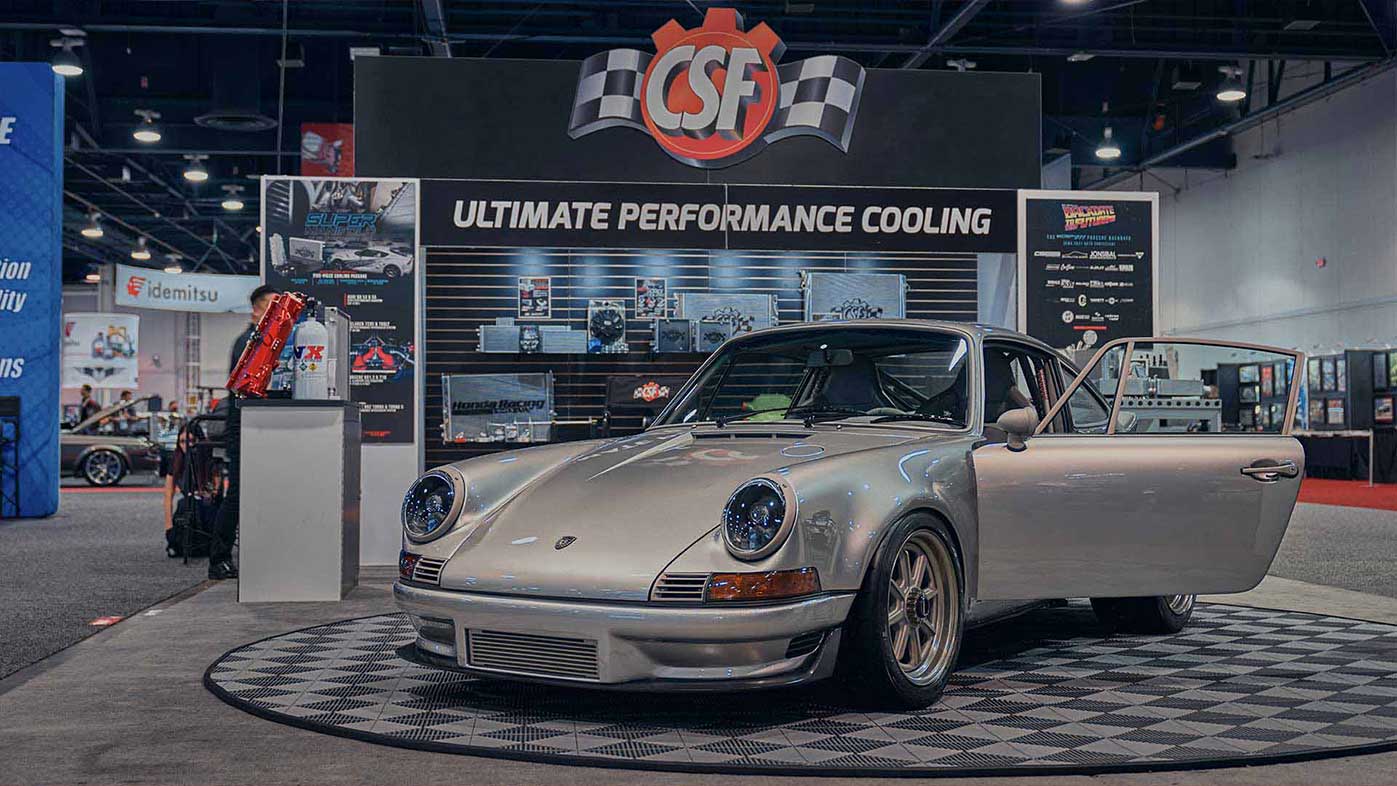 We’re getting back into the swing of things here at the office – the month or so leading up to, and after the SEMA Show always are hectic. This year’s show required even more prep than usual, though, as we were building our Porsche 911 to debut in Vegas.

The project started in the first week of January and wrapped up right on time, 11 months later, just a few days before the show. The entire build was documented and is available to watch on our Youtube channel. The finished result got great response from show-goers, and made it to the Top 12 in SEMA’s Battle of the Builders. You can find information on the car and some articles about it here.

This wasn’t the only “debut” we brought along to SEMA. We also brought along a slew of new products – the most recent and notable being two new oil coolers (like the one used on the CSF 911), and our BMW B58/Toyota Supra Charge Cooler Manifold with a new nitrous hardline kit.

The oil coolers utilize the same technology as our existing universal oil cooler lineup, but are made in new sizes to directly fit into 1973 Porsche RSR style front bumpers. These will be available to the public very soon – in both a single and dual-pass configuration.

The Charge Cooler Manifold, on the other hand, we released earlier this year. It quickly became one of our top sellers, and can now be found on the world’s fastest and highest horsepower Toyota Supras. Its development all started back in 2020 after TX2K, where we discovered the immense need for a high-quality and heavy-duty upgrade – especially for those running nitrous. So, we’ve now partnered up with industry-leader, Nitrous Express, to create a complete nitrous hardline kit specifically for the CSF B58 Manifold – the package will be available soon for purchase through Nitrous Express.

With last year’s show cancelled, the innovation in the industry seemed to be more evident this year. Outside of the CSF Cooling booth, we hunted down some of the newest and most innovative builds CSF had the pleasure of being a part of.

This restomod Porsche RSR build was transformed into an electric-powered, 435-horsepower EV with a 160-mile range by Electric GT. The new electric motor features two CSF Heat Exchangers mounted in the rear of the vehicle for both battery and inverter cooling.

All with the B58 engine feature products from our A90/A91 Supra Cooling packages, with the new Charge-Air Cooler Manifold in custom powdercoating. Ryan Tuerek’s car required some custom cooling solutions, so he went with two custom radiators that we had helped create.

Although we haven’t released any G80/G82 products yet, we have partnered up with a few people that we will be working with on the final stages of development and testing. The CSF x Art of Attack G82 build started a while back – the partnership was created with a goal of building the fastest G82 time attack car in the United States.

Stay tuned for the release of our G8X cooling solutions soon!

Gallery – Other Cars Cooled By CSF

The CSF 911: Backdate to the Future

We’re no strangers to building Porsches. Coming off his 1,000whp 1/2-mile 991 Turbo S and his RUF conversion 996 RTurbo, the owner of CSF Race, Ravi Dolwani, has decided to throw his hat in the ring for best Porsche build of the year. This time, going back through the pages of Porsche history with a unique 911 backdate – 73 RSR style with a modern twist.

END_OF_DOCUMENT_TOKEN_TO_BE_REPLACED

CSF at The First Ever Toyo Treadpass 3D

This year is a weird one. A lot of our day-to-day activities and things we see as “normal” have been altered or taken away completely. As we approached the end of October – things sort of felt out of place. We weren’t scrambling to get our booth shipped, sorting out transport for cars, rushing to get new products to debut – and for the first time in a long time, we didn’t spend Halloween in Vegas.

END_OF_DOCUMENT_TOKEN_TO_BE_REPLACED

What is a TOPCAR Stinger GTR? …Basically, you take a standard Porsche 991 Turbo S and turn the volume up to 11.

This build features TOPCAR’s Stinger GTR 18-piece body kit including custom front and rear bumpers, fenders, a custom diffuser and a ton of carbon fiber pieces. Painted in a BMW Frozen Grey color with yellow accents, both the interior and exterior have just the right amount of stealth and sport. This is a uniquely customized 991 Turbo S, created specifically for TOPCAR’s customer, Felix Ferro.