It’s that time of year again. SEMA 2016 is here and just like every year, we intend to bring the  boom! Our theme this year is #BMWTAKEOVER. We will be featuring the world debut of 2 fully built BMW race cars. The wide-body BMW M4 Endurance Racecar by Yost Autosport (Las Vegas, NV) and a custom wide-body E46 M3 Racecar with an E92 M3 swap by Pure Performance (Orange County, CA). We will also be introducing several new cooling systems for 2017.

Our flagship product release will be the world debut of our new F8x M3/M4 3-piece cooling package, which includes our new “GAME CHANGER” Top-Mount Charge-Air Cooler, “GAME OVER” front mount heat exchanger, and race-spec DCT cooler. Check out the rest of the applications that we’ll have on display in the e-vite posted below! 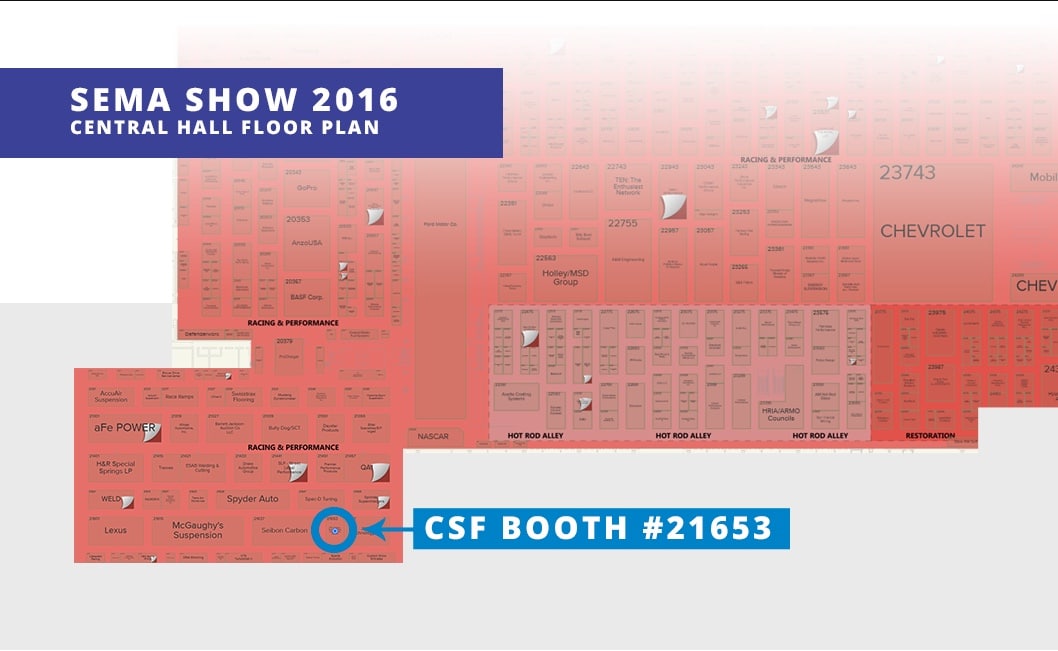 Come visit our booth #21653 in Central Hall. You won’t be disappointed. Throughout the show, you will also see other collaborations and CSF featured vehicles. Review the information and locations below so you can plan accordingly. See you there!

Also, make sure to follow us and our media partners on social media during the show. We’ll be posting live daily, as well as before the show starts with some “behind the scenes” footage that you don’t want to miss!

CSF is excited to announce another addition to its new Mercedes Benz AMG Cooling Line.

END_OF_DOCUMENT_TOKEN_TO_BE_REPLACED

As we move into trade show season, with some high-level projects nearing completion, CSF is shifting our focus to new product development. After the launch of our #1 selling Front Mount Heat Exchanger for W205 Mercedes AMG, we saw a lot of demand for more Mercedes-Benz products, so we are planning an entire lineup of new MB cooling systems.

END_OF_DOCUMENT_TOKEN_TO_BE_REPLACED

With things going haywire last year, many shows were postponed or cancelled – especially here near CSF’s Southern California headquarters. One of our largest shows of the year, Bimmerfest, was one of many cancelled shows last year – and with the East Coasts premiere BMW Show still a go, we decided to make the trek to Pocono Raceway in Pennsylvania.

END_OF_DOCUMENT_TOKEN_TO_BE_REPLACED

CSF is proud to announce its most advanced cooling system to date – the new Charge-Air Cooler Manifold for A90/A91 Toyota Supra and BMW G-Series (B58).