We’re no strangers to building Porsches. Coming off his 1,000whp 1/2-mile 991 Turbo S and his RUF conversion 996 RTurbo, the owner of CSF Race, Ravi Dolwani, has decided to throw his hat in the ring for best Porsche build of the year. This time, going back through the pages of Porsche history with a unique 911 backdate – 73 RSR style with a modern twist.

The car will be debuted at the 2021 SEMA Show, showcasing CSF’s new line of OEM+ Performance Oil Coolers for air-cooled Porsches.

The majority of the build is taking place at SV Auto in La Verne, California. Owner, Simo Veharanta, is a vehicle restoration expert. He specializes in Porsche restorations – this is where his passion and expertise really shines.

We enlisted the help of many previous build partners as well as some new companies from around the world, including:

Follow along as we set out to build a backdate with a perfect blend of classic style, inspired by early 1970s RSR race cars of the past, mixed with materials, technology, and innovation from 2021.

The journey begins at SV Auto, where we meet the owner, Simo Veharanta – who is spearheading the build. Simo’s an Expert Porsche builder, often found in the pages of Excellence magazine, with a pedigree stemming from his deep connection with good friend Alof Ruf from Germany.

Simo decided to take on building the CSF911 under one condition – the design process would be a mutual collaboration between himself and Ravi, with the ultimate goal of building the most fascinating Porsche 911 backdate ever to be created – a real blend of experience and old school, classic Porsche style with new ideas and modern technology.

Starting December 2020, Jon Sibal had started to create the design that’s now being used as the roadmap by SV Auto to bring this vision to reality. With no time wasted, on January 4th, the team at SV Auto started from scratch and began tearing down a 1982 911SC to bare metal.

No details will be overlooked, no corners will be cut. The Road to SEMA 2021.

Fast forward to March 2021 – as the body work continues on the CSF 911, the engine build is underway at renown Porsche engine builder, Prato Motorwerks.

Simo and the owner of Prato Motorwerks, Fabian Prato, have worked together many times in the past and he’s one of the best in the biz when it comes to building air-cooled Porsche engines.

We dive into the details of the 3.9-liter, naturally aspirated, 400+ horsepower custom-built engine sourced from SSF’s complete catalog of Porsche OEM and high-performance parts.

The key to reliability is not only choosing a knowledgable engine builder, but also using top-of-the-line parts – we’ve chose to go with parts from some of the top manufacturers in the world including pistons  from LN + Mahle, custom cams from WebCamshafts, Pauter rods, valve covers from Tarett Engineering, and an array of new OEM Porsche components.

Next, we’ll be finishing up our engine with our custom fabricated GT3 plenum and Kinsler ITB Fuel Injection Kit including drive-by-wire kit.  The engine will be finished off by renown motorsports electronics expert, Ryan Basseri from Rywire, who will be making a custom engine harness to sync-up the DBW and Motec ECU.

For the car’s interior, we turned to Rogelio’s Auto Upholstery. We’d used Rogelio’s before, for both our Evo X racecar and RSX daily driver, and their attention to detail is unmatched – it was a no brainer to partner with them to take the interior of the 911 to the level we had in mind.

We wanted to do something understated but over the top at the same time – staying true to classic Porsche interior patterns, but with a modern twist.

We decided to purchase 10 grand in authentic Goyard bags to start. The hand-painted pattern and burgundy color of the bags would be perfect used as the center portion of our Sparco SPX seats. The rest of the interior is wrapped in grey alcantara and leather.

We ended up using three of the bags, which were carefully cut and positioned perfectly vertically, horizontally and diagonally across the seat so that the pattern always looks correct no matter which way they are viewed.

…The final result blew us away and we can’t wait for you to see it.

With the deadline of SEMA now about 100 days away, in Episode 4, we have a few projects going on at once – we have the engine back from Prato Motorwerks, and the custom fabricated GT3 plenum and Kinsler ITB Fuel Injection Kit in place. Roger from Rogelio’s Auto Upholstery has finished up the Sparco SPX seats, but theres still some interior work to wrap up.

CSF brings in our great friend and automotive industry heavy-hitter, Ryan from Rywire Motorsports Electronics, to design and build the custom engine harness for the drive-by wire setup with our Motec ECU. We go in-depth and behind the scenes with Ryan to really understand what the difference Is between a good and great wiring harness and how it can effect the overall experience and drivability of a car.

After months of debating the perfect color, including a trip to Werks Reunion in Monterey during Car Week 2021 for more inspiration, we were under a time crunch to decide – we ended up with a special blend of silver to really tie in the ethos of the old meets new. A perfect mix between vintage and modern.

Simo, the owner of SV Auto, recommended Santana’s Auto Body in Ontario, CA for the job. With the help of owner, Mike Santana, and the rest of our team, we went with an exterior color that not only shows off the amazing metal and body work completed by Santana’s and Perry’s Custom Metal, but also ties in with the ultra-modern cerakote trim and burgundy found on the car’s interior.

Back at SV Auto, the engine has returned from Prato Motorwerks and the engine harness by Rywire is squared away. We go over tons of the components we’ll be assembling in the next episode, including the Stoptech Big Brake Kit, cerakoted to match the other components, titanium components from Chasing J’s, our customized Rennline tow hooks, the completed roll bar, muffler reinforcement from Fabspeed, CSF’s first articles of our new air-cooled oil cooler options and more.

Fast forward to the middle of September, in Episode 6, we’re only six weeks away from the SEMA Show in Las Vegas, Nevada.

The car has been back at SV Auto from the paint shop for less than a week – the team has been putting in 12+ hour days and has made tons of progress in just a few days.

Ravi and Simo, owner of SV Auto, go over all the work that has been done since the last episode. Not only is the car’s 3.9-liter engine, built by Prato Motorwerks, in place along with the transmission and wiring harness from Rywire, but some of the custom details are also starting to come together.

The countdown is on – now with less than 30 days to the SEMA show.

We’re moving forward with assembly, and we’ve made a last minute decision to switch up our original plenum choice – check out our newest addition to the build from Kinsler.

With the engine in place, and all of the wiring by Rywire complete, Beau from BBR Tuning joins us at SV Auto to bring the car to life – this thing sounds incredible!

As the SEMA deadline fast approaches, a couple of the people involved in the build behind-the-scenes have came to SV Auto to check out the car. Perry from Perry’s Custom Metalworks gives us some insight on how he created the car’s OEM-spec all-metal duckbill decklid.

With the rear decklid on, the interior close to complete, and the new Kinsler plenum on, the car is nearing completion.

Our custom Rotiform wheels showed up – designed by CSF, SV Auto, and Rotiform, the new CMP 3-Piece Forged Wheels will be available to the public soon.

Next week, they’ll be on the car, with custom centerlock adapters from Stanceworks Garage, and Falken RT660 tires.

It’s not a secret that many of the cars at the SEMA show are pieced together last minute – sometimes, leaving some loose ends to be tied up after the show. Us, on the other hand, we’re not building a show car – we’re building a car that’s debuting at SEMA, that we could drive off the show floor to the track if we wanted to.

In episode 9, the build is coming to a close. There’s exactly one week until the car’s debut. With the wheel and tire setup squared away, the car is officially off of the jig and on the ground. Now we have just a couple of days to finish the details.

Before heading out to Vegas for the SEMA Show, we made a quick stop at the “Boneyard” at the Chino, CA Airport – a killer spot for a photoshoot, thanks to our friends over at Cars in the Canyon.

Check out the car’s final touches and be sure to tune back in the week after the show for the next episode.

The completed #CSF911 made its official debut last week at the SEMA Show in Las Vegas. The response from attendees was spectacular and we are honored to have made it to the Top 12 in the SEMA Battle of the Builders competition.

Thank you to all of our amazing partners who helped make this vision a reality – it wouldn’t have been possible without their hard work and amazing talent.

Other Videos Featuring the #CSF911 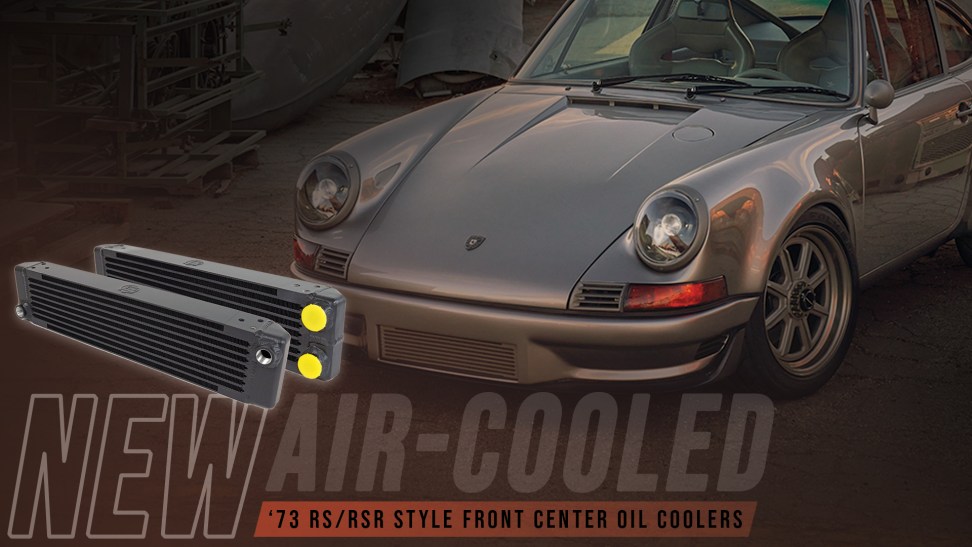 With the success of our versatile, high-performance and heavy-duty Universal Oil Coolers, we’ve expanded the lineup to include two new sizes.

END_OF_DOCUMENT_TOKEN_TO_BE_REPLACED 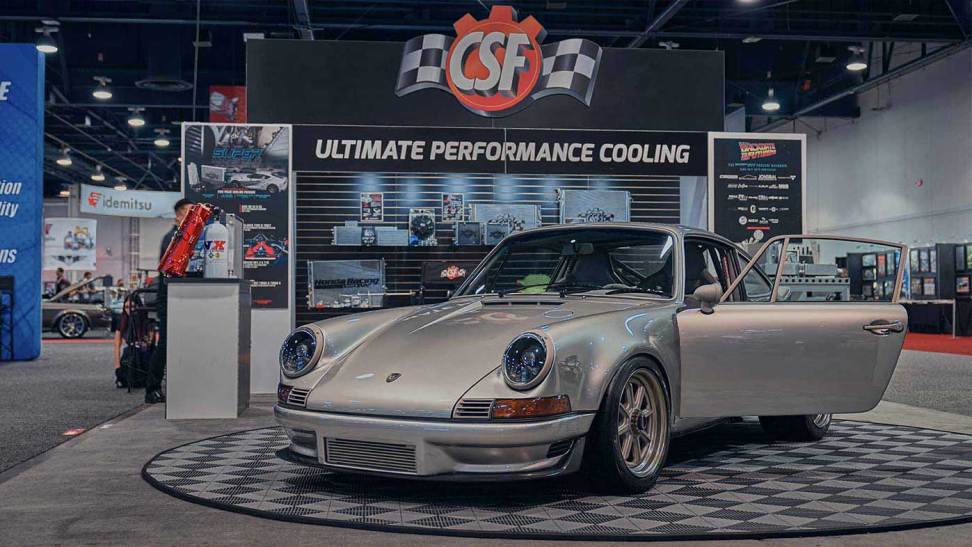 We’re getting back into the swing of things here at the office – the month or so leading up to, and after the SEMA Show always are hectic. This year’s show required even more prep than usual, though, as we were building our Porsche 911 to debut in Vegas.

END_OF_DOCUMENT_TOKEN_TO_BE_REPLACED

CSF at The First Ever Toyo Treadpass 3D

This year is a weird one. A lot of our day-to-day activities and things we see as “normal” have been altered or taken away completely. As we approached the end of October – things sort of felt out of place. We weren’t scrambling to get our booth shipped, sorting out transport for cars, rushing to get new products to debut – and for the first time in a long time, we didn’t spend Halloween in Vegas.