With things going haywire last year, many shows were postponed or cancelled – especially here near CSF’s Southern California headquarters. One of our largest shows of the year, Bimmerfest, was one of many cancelled shows last year – and with the East Coasts premiere BMW Show still a go, we decided to make the trek to Pocono Raceway in Pennsylvania.

Man, were we taken by surprise. CSF’s first experience at MPACT East was well worth the trip – we knew we would be back for 2021.

The CSF team flew into Philadelphia a couple of days early to have some time to spend with local customers and our largest distributor, Turn 14 Distribution.

We wanted to offer some product insight and get feedback from some of the people that sell CSF product, and coordinate the end of our largest promotion of the year – we had just ended a huge sweepstakes, in which a T14 dealer won a limited edition Tag Heuer watch from CSF.

We had a few hours to spare before we headed up North to Long Pond towards the MPACT Show, so we made our way to a dealer that was close by: Fabspeed Motorsports. As a somewhat new CSF dealer, this gave us a chance to have the bulk of the CSF team finally met everyone at Fabspeed in person. We had a quick tour of their facility, and we were on our way to the Poconos.

Now on our second trip to MPACT, we’re becoming pros at this…

One thing we learned: give the people what they want! (CSF products). We offered discounts on products purchased day of, and attendees cleaned house! We were stoked at the response, and were stoked we didn’t have to ship all of our display products back to California.

Coming from literally the other side of the United States, we turned to social media to help us find CSF equipped cars to have in our booth. We ended up with two badass builds – one coming from New Jersey and one from Ohio.

The M4 (@nighfallm4) was all out – bagged with three-piece wheels, a widebody, a big rear wing, and a chameleon vinyl wrap that shifted colors as the lighting changed. Through a clear window on the hood, you could see its CSF Charge-Air Cooler (CSF #8082), which was hydrodipped in a carbon fiber to match the rest of the carbon components in the engine bay.

Situated at the corner of the vendor row and entrance to the track, the Fire Orange F80 (@that_orange_m3) stole the show. The individual exterior paint was covered in a matte Xpel protective wrap and color-matched on a bunch of components – including the cage and pinstriping on the carbon rear seat delete. CSF was tasked with matching our Top Mount Charge Cooler to its engine cover and charge pipes as well.

The car drew in tons of attention with its wild, but insanely well done work.

The Rest of the Show

While it seemed the event drew a little less cars than last year, there was still tons of cars and tons of foot traffic to the booth – minus the couple-hour-long event entrance line. The event drew in a variety of builds – it was nice to see multiple modified G8X Ms, alongside a couple of matching M wagons as well as the rare specs and tons of well done F8Xs we’ve come to expect from MPACT.

While we spent most of our time hanging out in the show car areas, the event was jam packed with stuff for attendees to do all day, including a HPDE track, roll racing, a burnout contest, drifting, and more.

As the day came to a close, we were stoked to find out that the Fire Orange F80 M3 in the CSF booth ended up winning not one, but two, awards – both the Best BMW “Wild” and overall Best of Show.

A great way to end a great trip.

Having come so far for the event, we can say with complete confidence, this event is worth traveling across the entire United States. It’s without a doubt the largest BMW event in the country right now, plus the organization and hospitality of the team at MPACT is unmatched. 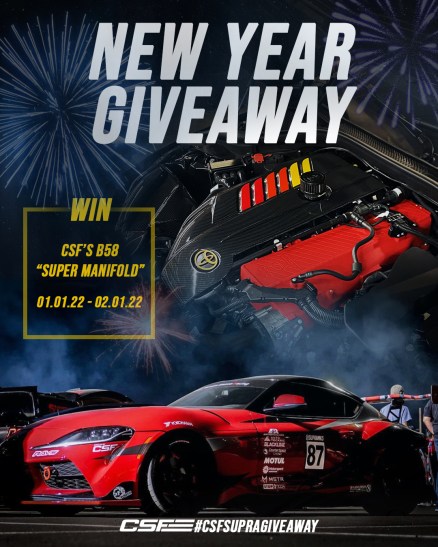 Our authorized dealer network will be running promotions on CSF product

END_OF_DOCUMENT_TOKEN_TO_BE_REPLACED

If you’re a car enthusiast, your ideal weekend probably involves a nice drive. When taking advantage of a week of PTO, the average person may choose a tropical vacation or a new country to explore – a car enthusiast, though, would probably opt for days of some of the best driving roads in their favorite car.

END_OF_DOCUMENT_TOKEN_TO_BE_REPLACED

CSF is proud to announce its most advanced cooling system to date – the new Charge-Air Cooler Manifold for A90/A91 Toyota Supra and BMW G-Series (B58).

END_OF_DOCUMENT_TOKEN_TO_BE_REPLACED

COVID put a huge damper on events on the West Coast and pretty much everywhere throughout 2020 – all the usual shows cancelled, including the highly anticipated SEMA and PRI Shows. In August, we had the opportunity to make the trip out to Pennsylvania’s Pocono Raceway for CSF’s first ever MPACT East – but that was about it.